A fitness and lifestyle post by Cambridge trainer Callie Durbrow 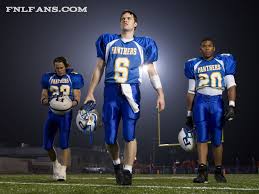 I watched the show while it ran for 5 seasons on NBC. Once it finished, I watched the series again on Netflix. Then recently I found that you could watch the entire series On Demand. So I’m doing that.

I’m not a huge dramatic television fan but for me this show has everything. Even though it’s set with teenage characters it’s incredibly well-written and realistic.

For those of you that don’t know (shame), it’s set in West Texas and covers the lives of a small town, it’s football team, coaches and players, the Dillon Panthers. In a dramatic twist in season 3 and 4 the town changes their zoning and Coach Eric Taylor loses his job so he takes a job at the run-down and beat up East Dillon High.

You see a range of characters as obviously the kids are in high school and they do end up graduating at some point. A lot of the kids stay in town and they appear throughout the series (hello, Tim Riggins). 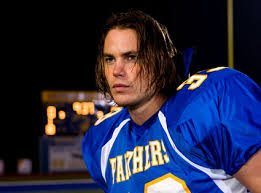 While watching this show I realized that it actually has some pretty cool messages. Here’s what I learned from Friday Night Lights.

Embrace the Suck. This is one of Tim Riggin’s famous lines (he’s got a bunch, get ready). One episode when the team loses their home field they set out to make a field from a cow pasture in order to play a home playoff game. Everyone is complaining and bitching and Riggins basically tells them to shut up and “embrace the suck.”

I believe you should create your life the way that it works for you and so that you can enjoy every day but there will always be things that you don’t want to do. So when that happens just embrace the suck. Just do it. Don’t complain because no one really cares to listen. Everyone has shit going on in their lives.

Don’t pile more stuff onto people. Embrace the suck and do the job and be sure to add to people’s lives, not take away.

No Regrets. Again, a Tim Riggins-ism. No matter the context; a party, a big game, a job interview or just some day-to-day West Texas stuff, it was always “No Regrets.”

This is pretty simple to me. Think about every day as a clean slate, a chance to do some good and be a better version of yourself. Be a little better than you were yesterday.

Time is the one thing that we don’t get back and I think people are so lost in their day-to-day BS that they lose sight of the important stuff.

Don’t be that person that just goes through your week, day in and day out, and just lives for the weekends.

Enjoy your family. Take care of your body. Do something good for someone. 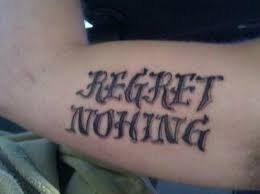 I can’t remember the exact quote on this one but there’s a scene when Coach Taylor has bailed Luke Cafferty and Vince Howard out of jail for a fight and he’s telling them they need to step it up and stop wasting every day.

He tells them that they can either step up and make something out of themselves or keep pissing away each day and ruining the only life they have.

We only get this one chance and like I mentioned above about not regretting anything, don’t waste time.

Make yourself better every day and don’t look back and wish that you did something. Actually step up and do it.

This is pretty much the standard that the Dillon Panthers and eventually the East Dillon Lions lived by.

It’s pretty cool if you think about it. Keep your eyes open to the possibilities and the life that’s in front of you, keep your heart full of love, motivation and pride and you’ll be all set.

Don’t get bogged down with meaningless crap from daily life. Keep your eyes on your goals and make sure there is a clear picture. 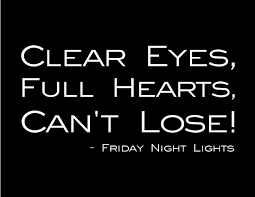 Let me know if you enjoyed this post by simply clicking “Like” at the top of the page.

Go out and be a better version of yourself today.

What is your hometown? – Manchester, MA What brought you to DPT? – I got plantar fasciitis and couldn’t run for several months and needed…

What is your hometown? I grew up moving around a lot, starting off in Groveland, MA and living in 6 states. Now we call Auburn,…

What is your hometown? The Queen City What brought you to DPT? I was looking for something new to do as my couch was starting…

Talk with a coach about your goals, get the plan to achieve them.
LET’S DO THIS